It’s nice to see so many young people in the audience. 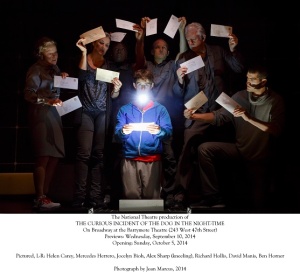 This would not ordinarily be a lead for a review, but The Curious Incident of the Dog in the Night-Time, at the Barrymore, has already had a long run and plenty of notices. The British import came over with plenty of buzz, having won 7 Olivier on its home turf, including one for Best New Play.

Playwright Simon Stephens adapted Mark Haddon’s best-selling mystery novel to the stage in such a brilliantly simple and direct fashion as to make The Curious Incident a moving and dynamic drama. 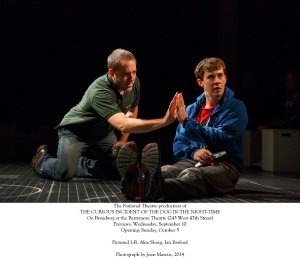 The Curious Incident earns the attention it garners from the youngsters and two floors below from the older crowd. The upper balcony seats, by the way, offer a great vantage for the panorama of this show. Its minimalist set, by Bunny Christie, of a few cubes and moveable furnishings, and diodes, courtesy of Paule Constable, lighting designer, and video designer Finn Ross, are tremendously effective. They aid in furthering the mood and the plot of The Curious Incident. There’s a lot going on this stage set, with people sometimes taking on the role of bed or computer. With such spectacular special effects, it’s hard to claim TheCurious Incident as low-key entertainment. Nonetheless, it is a mellow experience.

The ensemble, under the direction of Marianne Elliott, are all terrific and The Curious Incident is a rivetting production.

For more information, please visit the official website at http://www.curiousonbroadway.com/

For an opinionated woman such as I, blogging is an excellent outlet. This is one of many fori that I use to bloviate. Enjoy! Comment on my commentary. View All Posts