Avenue Q went there after its Broadway run ran down. Now Jersey Boys, Rock of Ages, and even The Play That Goes Wrong, have come to Worldwide Plaza’s New World Stages for a chance at a little longevity. The place offers off-Broadway alchemy to shows that still have a little more life in them, but aren’t filling the big house seats anymore.

They also offer the audience a new prospective: Avenue Q, for instance, was more enjoyable in the smaller house when we saw it. It had won pretty big at the 2004 Tony® ceremonies, of course, but we found the intimate setting at New World more appropriate to its tone and style. Worldwide has lots of stages where a fun show can frolic a bit longer.

Off off-Broadway has traditionally been the place where new and innovative get their start. The seeds of a more forward thinking theater have taken root on the stages of LaMaMa, a famously “experimental theater club,” or its ilk. Little but prominent theater companies have always flourished in NYC. Some of them have made advances in theater history, others have been playgrounds for more or less minor productions.

Of late, Broadway has taken on the tone of some of these “variety houses” with shows such as The Prom and Be More Chill hitting the great white way. The latter won its composer Joe Iconis a 2019 Tony ® for Best Original Score. For his fans the emergence of his next show, Broadway Bounty Hunter at the off-Bway Greenwich House Theater may have been great news; the show will close after a mere 48 performances on August 18th.

The off and off-off houses are more nimble than the main stem theaters. Production costs allow them to transform the audience experience, and try new things. A short run is less of a failure in this environment.

Shows like Be More Chill or The Prom might have had greater success at the old Promenade on 76th and Broadway, or The Little Shubert (now Stage 42). Neither of them thrived as full-on Broadway house productions; the former closed on August 11th after just about 200 performances all told; The Prom also closed on the 11th after332 performances including previews. Perhaps they too will find theimselves at New World Stages, a place where variety is really the spice of life, for a little extended life of their own.

Partnering has developed a new look as the 21st century progresses. Partly, this is a reflection of a more liberal social milieu. Gender fluidity is the term of art for this LGBTQ-era. Same sex marriage, mixed use bathrooms, dorms which house both boys and girls on the same floor are part of our new-age maturity.

Equality has certainly not come full-circle. The workplace and the quotidian are still often off-kilter and exhibit the same kinds of inequities that have been with us forever. We are working on it, much as the dance makers are working on many more diverse ways to partner.

Many choreographers– Justin Peck, Christopher Wheeldon Benjamin Millipied etc.– experiment with male on male lifts, and Jessica Lang has a woman catch and release her male partner at one point in Her Notes.

Roles can be reversed for Mr. Mom and his executive wife. We’ve come to accept that and to expect to see it in our arts and entertainments. The glass ceiling– and other prejudices and biases– will be broken and taken down in tiny steps rather than with crowbars.

via Daily Prompt: Shine with thanks to Ben Huberman, The Daily Post for the inspiration

Those who crave the spotlight most often become entertainers. Their talent demands it. It is their calling to shine.

We applaud them, and in so doing bask in the glow of their accomplishment. They are center stage with the footlights on them, but we are illuminated by their performance.

Their light shines on us as they render and interpret and presnet their truths. Greater  performers shine brightest, and we shine brighter too.

In the theater, the sounds of a crowd pleased are often accompanied by a standing ovation for those who pleased us.

It is a way of saying thanks. Our gratitude makes us feel good, too. We yell “Bravo” and are rewarded with a sense of our magnanimity. Our approbation fills the theatre.

Expectations met make for a delightful experience. Who doesn’t like to be right? The satisfaction of seeing a top-quality performance is much greater than that of knowing what’s going to misfire.

In “I’ll Eat You Last: A Chat With Sue Mengers,” John Logan’s new play at the Booth Theatre through June 30th, the Divine Miss M (and I’ll bet even she’s tired of this moniker attached to everything she does) meets all the highest expectations! Bette Midler makes a divine Sue Mengers, the king-making and contentious Hollywood agent who died in 2011. 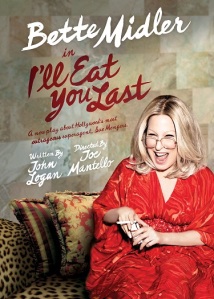 The man in the Booth box office warned that there would be no singing in this show, but Bette Midler’s acting sings nonetheless.

“I’ll Eat You Last…” is an intimate and gossipy pleasure.

Unfortunately, the low expectations we had going in for “Far From Heaven,” at Playwrights Horizons through July 7th, were also exceeded. Richard Greenberg’s book is based on the Todd Haynes motion picture of the same name, with music by Scott Frankel and lyrics by Michael Korie, none of which adds much to the rather thin tale.

As “Far From Heaven” opens, Cathy Whitaker (Kelli O’Hara) is a typical and very conventional New England housewife circa 1957, enjoying the beauties of her home and family. Spoiler alert for those not familiar with the film, Cathy’s story can be summed up as: my husband, Frank (Steve Pasquale) is gay and I’m in love with the gardener, Raymond (Isaiah Johnson).

“Far From Heaven” is an operetta, and the orchestra’s over-playing the singers interferes with the players’ storytelling. The fine cast are excellent; Kelli O’Hara gives a grand performance; Isaiah Johnson as her love interest is superb. Steve Pasquale is a perfectly despicable Frank Whitaker, torn between what he thinks is normal and what he wants. (See an extended review by TB at VevlynsPen.)