via Daily Prompt: Shine with thanks to Ben Huberman, The Daily Post for the inspiration

Those who crave the spotlight most often become entertainers. Their talent demands it. It is their calling to shine.

We applaud them, and in so doing bask in the glow of their accomplishment. They are center stage with the footlights on them, but we are illuminated by their performance.

Their light shines on us as they render and interpret and presnet their truths. Greater  performers shine brightest, and we shine brighter too.

You have to go a little further these days to deliver cutting-edge. Tricks of the trade from happenrings and multi-media presentation to theater of the absurd have become standards in all staged productions, and not just the experimental ones.

Playwrights reciting monologues, incorporating video into their stories, engaging — or surrounding– the audience are all part of the main stage and the “fringe” scene. These days, it’s probably content more than style that distinguishes “fringe” entertainments from the mainstream.

Some of us are staying closer to Broadway at downtown’s New York International Fringe, celebrating its sixteenth anniversary from August 10th to 26th.

First for the NYC homebodies: At FringeNYC, there is a plethora of events including 1200 performances ranging from monologues to musicals.  Among them, a New York premiere of the intriguingly-titled “The Zebra Shirt of Lonely Children,” starring Matthew Trumbull, running from the 11th to the 24th of August at The Players Theatre.The Players, of course is just one of the many venues at which FringeNYC is being shown.

“Mother Eve’s Secret Garden of Sensual Sisterhood,” an  award-winning fringe-fest musical, with an equally interesting title, is playing at The Players Theatre from the 15th through the 26th.

Jennifer Jajeh’s “I Heart Hamas…” on the program at Edinburgh from August 14-25th, takes a fresh perspective in describing her experience as a Palestinian American. There’s humor and a direct honesty in her interesting solo show. (Visit www.ihearthamas.com to see more.)

Appearing from the 14th to 27th of August at the Scotland Fest, “Death Boogie” is a provocative multi-media musical, starring Darian Dauchan and the musicians of The Mighty Third Rail. “Death Boogie” has a distinctive and original point of view. (See http://www.edfringe.com/whats-on/theatre/death-boogie for details.)

Sandro Monetti’s monologue about Hollywood’s big names, “Clooney, Cowell, Pitt and Me…” is tabloid newstand fun. He’s performing only on August 18th. (Learn more at www.sandromonetti.com.)  It will come as no surprise to hear that naricism comes with being celebrated in tinsel town, but it is nice to hear about it from Monetti’s first-hand encounters.

“Eat Sh*t, How Our Waste Can Save The World” definitely falls into the far-out subject matter bucket.
The playlet, presented by Shawn Shafner’s The Poop Project, is in fact a bit polemical, if very sincere. It will be at Edinburgh from August 15th to 27th. (Visit www.thePOOPproject.org to find out more.)

In 1947 eight theater groups turned up uninvited to the then brand-new Edinburgh International Festival. These pioneering 8 went ahead and staged their shows; in 1959 these “fringe” players were made official by the Festival Fringe Society. The policy The Edinburgh Festival Fringe Society established at the start was that “anyone with a story to tell and a venue willing to host them” could present on the annual programs.

59E59 Theaters offers some of those heading out to The Edinburgh Festival Fringe a place to tune up and refresh for the long trip. At “East to Edinburgh 2012,” there are sixteen new shows prepping for the competition at the Festival Fringe to delight and intrigue.

Catch up with some old favorites, or meet up with some completely new productions, as the pre-Festival starts on July 10th and runs through July 29th.

Sarah Ruhl’s “Dead Man’s Cell Phone” rings in from the 19th to the 21st with a young cast. Teen angst set to 1960’s Brit-pop rocks “MOD” in performances beginning on July 21st.

“Captain Ferguson’s School for Baloon Warfare” makes another appearance at 59E59 before going across the pond to Scotland. (See our review from the eccentric Captain’s earlier visit to 59E59.)

From monologues and standup to serious drama, East to Edinburgh showcases a taste of what the big Festival offers.

To find out more about East to Edinburgh and the other productions at 59E59 Theaters, visit, http://www.59e59.org/.

What brings an award-winning seventeen year old playwright (Ruby Rae Spiegel), a famously controversial one (Neil LaBute), a long-established and much respected theater writer (Christopher Durang) and an up-and-coming voice of off-Broadway (Alexander Dinelaris) to the same stage?

It’s “Summer Shorts,” a festival of plays defined by their brevity, now in its fifth year at 59E59 Theaters through September 3rd! The challenge of “Summer Shorts” is to create a complete play within a time constraint of approximately 20 to 30 minutes. Each “short” is expected to have a full arc, but they need not be strictly speaking, and most of the selection presented by the authors above in the Series A repertory is not, one-act offerings. Some are comprised of several scenes, that shift in location, and introduce their characters. Some are monologues.

Since it is not easy to present a beginning, middle and end in such a short form, some of the plays succeed better than others. 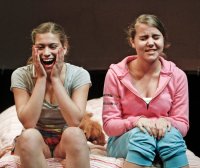 Each bill offers four little vignettes, and in “Summer Shorts 5– Series A” , the offerings included:

Neil LaBute’s “The New Testament” proves to be not just a very funny, well-paced work, it also tells its story cogently, under the direction of Dolores Rice, tantalizing out the details of its brilliantly simple plot. Jeff Binder, with foils in Mando Alvarado and James Chen, is particularly adept in this little tale of racism and self-righteousness.

“In This, Our Time…,” Alexander Dinelaris paints vivid portraits of a troubled modern
family. JJ Kandel directs the dynamic cast in a minimalist dramatic work that mystifies with an unsatisfactory ending.

Erin Darke and Ted Koch in a scene from In This, Our Time… by Alexander Dinelaris, directed By J.J. Kandel, part of SUMMER SHORTS 5 Series A.ANNUAL FESTIVAL OF NEW AMERICAN SHORT PLAYS Photo Credit: Rahav Segev

“Triple Trouble with Love” is Christopher Durang’s entertaining stand up comedy of a play about the perils of relationship. It features Nick Choksi, Beth Hoyt, and Aidan Sullivan in a triptych to dysfunction.

There was no Mozart in the Mostly Mozart Festival presentation by Mark Morris Dance Group at Lincoln Center’s Rose Theatre in the Time Warner Center from August 18th through 20th. The much-touted New York premiere of “Renard,” set to a score by Igor Stravinsky that was played by the skillful MMDG Musical Ensemble under the baton of Stefan Asbury, fell under the Sravinsky Too rubric, however.

(See a video of typical Morris dancing at http://www.youtube.com/watch?v=xeFyYFxTqtQ)

Also on the program was last year’s sensation– “Socrates,” a piece choreographed to music by Erik Satie– which is certainly dynamic, but the dance to celebrate on this program is “Festival Dances,” set to Johann Nepomuk Hummel’s Piano Trio in E Major, Opus 83. “Festival Dances” is a beautiful and gentle work in the spirit of Agnes DeMille with plenty of balletic influence.

Both “Renard,” which is a comedic piece, and “Socrates” make fine use of vocal accompaniments. Renard is adorable, acrobatic, and reminiscent of silent films. The costumes by Maira Kalman with labels naming each of the characters beginning on the front of their shirts and ending on the back and little headpieces of crowns or ears are imaginative and simple. The Cock’s Chics are dressed like 1960’s cheerleaders in crinolined skirts so when Cock breaks out into a little endzone dance it just feels right. The stylized violence also seems appropriate for the story.

Visit markmorrisdancegroup.org to find a schedule for future MMDG performances.

To find a schedule for Summer Shorts5, go to 59E59.org