Repressive regimes– like the communism that the journalist and “Cold Warrior” Joseph Alsop detested or the equally unsavory home-grown witch-hunting of Joseph McCarthy– breed secrecy and fear.

Alsop is as guarded about his personal life as he is aggressive in his professional activities. Joseph Alsop’s was a liberal’s conservative, anti McCarthy, and as excited by the Kennedy presidency as he was hostile to LBJ’s good ole boy politics. He called both the Cold and Vietnam Wars all wrong but stayed the course even as his patrician accent and bespoke wardrobe went out of fashion. His gleeful quest for power and influence made him a much less reliable witness to history than his brother and one-time writing partner, Stewart (Boyd Gaines.) 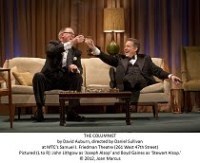 Everyone in the cast of “The Columnist” is excellent, with John Lithgow in the lead giving an affecting portrayal of the work-aholic newspaperman. Grace Gummer, as Susan Mary’s daughter Abigail, makes the most of her role as a foil to her stodgy stepfather.

While “The Columnist” has a steady foothold in the machinations of Washington politicking, Matt Charman’s “Regrets.” at MTC’s NY City Center Stage I through April 29th, takes a regrettable detour into McCarthy-era politics.

TONY NEWS: or is it? John Lithgow is a nominee for 2012 Best Actor in a Drama!

In “Regrets,” a group of men camp out in a Reno bungalow colony to establish residency. They are each bruised by their broken marriages. Mrs. Duke’s (Adriane Lenox) cabins are a way-station for their lost souls. 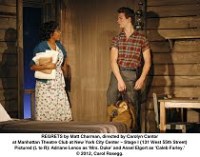 “Regrets” delves into a different kettle of secrets than those of “The Columnist.” The twist that turns “Regrets” onto a political pathway is either inspired or unnecessary– depending on your point of view. The horrors of hiding from McCarthy are real enough, but in this reviewer’s opionion, they lend an air of unreality to this pleasant and interesting drama about the relationships of unmoored men. Ben Clancy (Brian Hutchison), Gerald Driscoll (Lucas Caleb Rooney), and Alvin Novotny (Richard Topol) welcome the newcomer, Caleb Farley (Ansel Elgort) with the wariness of those trapped far from home.

The cast all give sterling performances, but the rookie, Ansel Elgort, making his professional debut, is definitely a stand-out.

For more information on “The Columnist” , please visit http://www.manhattantheatreclub.com/
where you will also find videos from the production.

To get tickets for “Regrets” before it closes on Sunday, go to http://regretsplay.com/