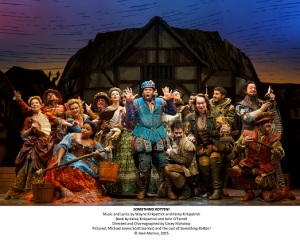 Who is Brian d’Arcy James?
How many Tonys (out of its 10 nominations) will Something Rotten! win?

Who is Howard McGillin?
Why did the Tony committee ignore much of Gigi’s good qualities? 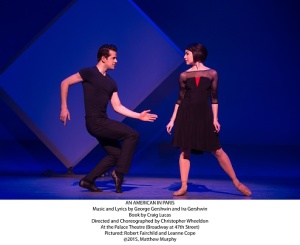 Who is Robert Fairchild?
Can An American in Paris win for Best Musical over Something Rotten!?

Bonus Round:
What is Fun Home?
When will Hamilton open on Broadway?

What is The Visit?
Will Chita Rivera’s Clara prevail on Tony night, winning over the yet un-crowned Kelli O’Hara?

**Jeopardy® is a trademark for a game show invented by Merv Griffin.

Brian d’Arcy James is having the time of his life.

In the context of Something Rotten!, at the St. James Theatre for what is destined to be a very long run, his jubiliation seems unwarranted.

Nick Bottom, the character James so winniningly inhabits, is a failed playwright, who has lost the patronage of Lord Clapham (Peter Bartlett.)  Nick’s deep envy of Will Shakespeare’s (Christian Borle) meteoric success gnaws at him.

To help with the family finances, Nick’s wife Bea (Heidi Blickenstaff) disguises herself as a boy in order to work at menial labor. She says woman should be allowed to work; “it’s the ’90s, soon it will be 1600; there’s a woman on the throne….” Nick’s writing partner is his brother, Nigel (John Criani), a talented young man who admires Shakespeare. 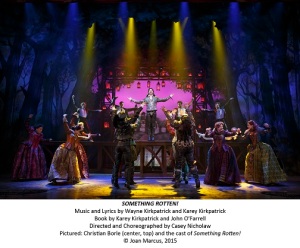 Nick is reduced to  paying a soothsayer, Nostradamus (Brad Oscar), for ideas from theatre-future. The result of the collaboration between Nick and the psychic is the creation of the world’s first Musical. When Lord Clapham withdraws his support, Shylock (Gerry Vichi) offers his patronage, and complications ensue.

“Welcome to the Renaissance” is the anthem with which the Minstrel (Michael James Scott)  guides us into Something Rotten!

Rounding out the cast are the delightful Kate Reinders as Brother Jeremiah’s (Brooks Ashmanskas) daughter and Nigel’s love interest, Portia; along with a superb swing chorus in Something Rotten!

As for Tony nods, Something Rotten! has garnered 10 well-earned nominations, two of which have gone to Nicholaw for direction and dance-making. Something Rotten! is up for the Best New Musical of 2015 Award  Brian d’Arcy James got the nomination for Best Lead Actor; Brad Oscar and Christian Borle (a winner for Peter and the Starcatcher) are in competition for the Best Featured Actor distinction.

Something Rotten! is something deliciously witty, clever and entertaining.

For tickets and more information about Something Rotten!, please visit  http://rottenbroadway.com/.